I kid you not.

There is a Santa Claus.
Posted by Charles Perez at 11:55 No comments:

This is what the GOP has pushed on the American people and BushCo., not content with the damage already done, is actively pushing this same agenda on the rest of the world. Fortunately he doesn't have much time left to wreak more havoc on the world.

But can this trend be reversed? Can we undo the damage done, not only to our government but to our planet?

A noxious cocktail of soot, smog and toxic chemicals is blotting out the sun, fouling the lungs of millions of people and altering weather patterns in large parts of Asia, according to a report released Thursday by the United Nations.

We must have a more sane policy approach to our impact on the world. I hope that an Obama administration will be up to the task.

And I hope we are not too late.
Posted by Charles Perez at 12:11 No comments:

Lost in the Wilderness

It's where lots of pundits are saying the GOP will spend the next several years. And it wouldn't be a bad thing if that stretched into decades. But to me it's where I wish the media would leave Sarah Palin.

She cost McCain - if not the election - at least a lot of votes. She cost the GOP what little credibility they had left. And most of all - she's an idiot.

On Hardball last night, Chris Matthews asked a GOP guest, who had claimed Palin was ignorant of the world but not stupid, whether if you were still ignorant in your forties, weren't you, de facto, stupid? It was a brilliantly obvious question. The only answer to which is a resounding YES.

So please; I don't care if she's making moose chili back in Wasilla. I don't care about her ignorant, pregnant daughter or her pot-smoking future son-in-law and I most assuredly do not care about the first dude anymore. Her and the rest of the Wasilla Hillbillies have had their 15 minutes. In fact it was old after about five.
Posted by Charles Perez at 08:17 No comments:

It feels great to say that! And it's wonderful thinking about the Obamas in the White House; the return of adults to government. But as tough as the last eight years of BushCo. have been, as rough as the campaigns were, the really hard work remains before us.

Being invlolved really made me feel empowered, like I have a stake in what's going to happen. But I know that can fade as the memory of making phone calls, and campaigning and blogging starts to fade. Everyone else involved likely feels the same. We've all proven that we like to be involved - that we WANT to be involved and it would be a great waste of a resource if an Obama administration leaves the blogosphere and the Netroots behind.

So while I will gladly continue to write about the good, the bad and the ugly of an Obama administration, I don't anticipate there being anywhere near the amount of "stuff" to complain about as during the last eight years. I want to stay involved. I want to help more.

I'm waiting for my invitation.
Posted by Charles Perez at 12:43 No comments:

It was worth waiting for!

Now the question that only the future can tell: What kind of change have we wrought?

Will this be incremental change; bending the arc of history ever so slightly in our continuing attempts to create a more perfect union? Or has this election been a true breach, a discontinuity, in the path our country will take into the future?

BushCo. and all of its hangers-on have left a horrid mess to be cleaned up. And, not happy with the wreckage so far, they continue to push for deregulation and other changes purposely made more difficult to reverse for the next administration. If President-Elect Obama can rally the country and - perhaps most importantly - Congress to his side, if - and this is the biggest if - he can make a true start on restoring the USA to a country of laws, if he can restore our Constitution, then perhaps this will become the Change we all hoped and worked for.

Those of us who helped, in big ways and small, cannot now abandon the cause. I hope that a newly inaugurated President Obama will reach out again to the army of volunteers that helped him get to the Oval Office and ask us to help. I stand ready to lend that helping hand. I'm sure all of us do.

Ready to move us into a future we can all be proud of.
Posted by Charles Perez at 09:24 No comments: 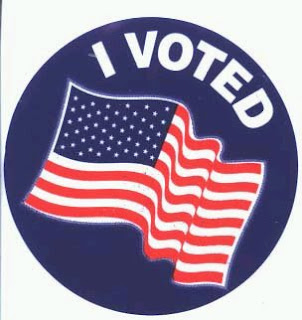 That's how I was greeted this morning at my polling place. And while there were certainly more cars and people at the fire department in my little town than I ever remember seeing, there was no line to "pull the lever." So I walked right over to the machine - the old-fashioned, curtained, mechanical lever machine - closed the curtain, flicked the appropriate levers and walked out feeling very much like I was helping to make history. To change the path of history.

Now all we can do is wait.
Posted by Charles Perez at 07:58 No comments:

There are hopeful signs everywhere that things are about to change. Obama remains ahead by way more than the margin of error nationally. Pundits and poll watchers are already saying the "L" word.

But the past two Presidential Elections have proved nothing if not that the Republican machine - levers firmly in the grasp of the likes of Cheney, Rove and their PNAC friends - will do anything to maintain that grasp. This win needs to be a true blow-out, a real landslide. We have to show what a true mandate looks like. So that we can send the Republican reprobates, if not off to jail, then at least scuttling back under the rocks from which they came.

Don't hope. Hope without action is only wishful thinking.

Don't pray. If you believe, it certainly won't hurt anything on its own, but without action it's only wishful thinking.

Vote. It is only action that counts now.

And between now and the time you pull the lever or press the touch-screen or make your mark on the ballot, commit to action. Call to get out the vote. Tell your neighbor or coworkers to vote. Drive someone to the polls.

Only when the election is called, only when enough Electoral votes have been amassed, then - and only then - can you relax.
Posted by Charles Perez at 10:24 No comments: