Although this article was written from the point of view that this should make Israel worry - and that's true enough - my first thought was of BushCo.'s continued sabre-rattling aimed at Iran.

Russia’s arms export agency Rosoboronoexport disclosed recently that it plans to sell Iran up to 250 advanced Su-30 fighter bombers, dramatically increasing the power projection capability of Iran and possibly giving it a nuclear delivery vehicle other than missiles.

Should they do the unthinkable, this administration will want to begin an invasion - or indeed any kind of military move against Iran - with aerial assault. To clear the way for our fighter-bombers, first will come the cruise missiles which will attempt to take out key air defense sites and to destroy as many aircraft as possible on the ground. Then will come our fighters to finish the job on air defense sites and to escort heavier aircraft. 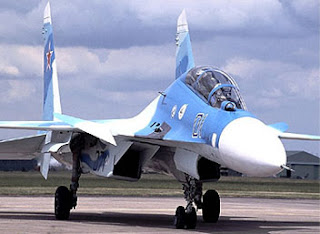 That's where the SU-30 comes in. This is no Soviet era fighter, heavy and underpowered. The Sukhoi is a first rate aircraft; in the right pilot's hands it can match our F-16s and F-15s. The article also goes on to say that the Russians are also considering making one or more aerial refueling aircraft. This means that should we choose to give Iran any warning, they can launch these high-value aircraft ahead of time and keep them airborne or move them to a friendly airfield far enough away to stay in reserve until really needed.

Yes, it's true that Israel should be concerned about this potential sale. But Our Air Force should be every bit as concerned. Iran's air force is not likely to flee or remain on the ground as did Iraq's should we invade. But even should BushCo. actually make an intelligent choice and not invade or attack Iran, their constant, bellicose rhetoric has made the already unstable area even more dangerous. They've driven this sale as much as any amoral Russian arms dealer.
Posted by Charles Perez at 08:09 No comments:

Through a Glass Darkly

The dichotomy of world-views between those who stay truly informed and those who remain stubbornly un-informed via FOX News or Rush Limbaugh is sometimes easy to overlook. I read widely for news and information as do most of the people whose blogs I read and most of those who comment here.

But a recent couple of posts over at Talking Points Memo highlighted that dichotomy in a way that literally had me shaking my head. You can read those posts here and here. But the upshot is that for the Republican "base," the threat "if we don't fight them there, they will follow us home" is no empty rhetorical turn of phrase. They are truly afraid of the "World-wide Caliphate" imposed by radical islamists.

While most of us would just roll our eyes at such a fear, the base has little reason to think otherwise. The great right-wing spin machine feeds that fear without reference to the reality of current Islamic states. Considered critically, it's easy to see that there are no Islamic states with anything like the military-industrial capability to create such an empire. They are all third-world countries propped up by Petro-dollars or dictators stoking the fear of a "Crusade" against Islam from the outside world. And all of them keep their citizens subdued with cash (think Saudi Arabia) or radical Islam (see Iran) and most of all an iron fist.

I'm not sure what can be done about this ignorance... Republicans only want schools to graduate young people ready to work, not to think critically and they have so denigrated public education for so long that it could be decades before the system recovers. Media consolidation ensures so much uniformity of poor reporting that there is little chance, for now, that they will be the prescription for a change of mind. And the most recalcitrant of the base refuse to read anything other than the Bible or to hear anything other than FOX News.

So we've wound up with two relatively small populations - one in the Middle East and one in America - who are uninformed, mis-informed, uneducated or under-educated, and kept deathly afraid of the other. Not a prescription for sanity... or peace.
Posted by Charles Perez at 09:57 No comments:

Censorship by Any Other Name...

The right to peaceably assemble - Constitutionally guaranteed - can be denied in so many ways; overt or covert. But the latest attempt by BushCo. is laughably transparent. And should you have any thoughts that this might just be the Washington D.C. city government enforcing their rules, well you just haven't been paying attention.

What are we to make of the fact that the city of D.C. has ordered all the posters for an anti-war march to take place in September taken down? Were they all posted in the wrong places - every one of them? Nope. Is the group missing some key piece of permitting for the event? Apparently not. So what infraction of the law could be so heinous that all the posters in the entire city must be removed or the group could face a $10,000 fine?

Washington city authorities said the posters have to come down because they were stuck on with adhesive that did not meet city regulations.

Un-f*cking believable.
Posted by Charles Perez at 09:18 No comments:

Smile, You're on Candid Camera

It was just last Thursday that we learned that because of the now numerous "previously unseen provisions of the Patriot Act" the government would now be using U2 spyplanes on you and me. Some said that this was an aging platform and couldn't fly all that much and really where was the harm. I said this:

And the Democratically controlled Congress just handed BushCo. even more authority to use the full panoply of U.S. spyware on you and me.

This administration has never met a slippery slope it couldn't immediately make steeper and more slippery. And this was no exception. Now we learn just how quickly BushCo. decided to slide right down the bottom of the slope.

Local and federal agencies are to have vastly expanded access to information gathered from spy satellites in the U.S., the Wall Street Journal reports.

Information from "some of the U.S.'s most powerful intelligence-gathering tools" will soon be at the disposal of a wide array of law enforcement agencies at all levels of government, reports Robert Block in the Journal Wednesday. Director of National Intelligence Michael McConnell decided to increase access to the spy data earlier this year and asked Homeland Security Secretary Michael Chertoff to facilitate access to the spy data by civilian agencies and law enforcement.

Right to the bottom. Who'd have thought they'd do that?

Oh, and thanks (read f*ck you) again to those Democrats who voted for this.
Posted by Charles Perez at 10:15 No comments:

Circular Reasoning; It's All The Reason They Need

The drumbeat to war with Iran continues; perhaps not as loudly or as incessantly as it did for Iraq, but with many of the same players. The latest bit of Kabuki theater - coordinated, no doubt, by the chief drummer, Dick Cheney - is this:

While the move ostensibly allows the US and the international community to target the group's financial interests it also gives BushCo. a ready made designation of the Revolutionary Guard as a terrorist group.

I can see Darth Cheney on the Sunday morning talkers already:

Talking Head: *breathlessly* Their entire military is composed of terrorists?

DC: Yes, they've been designated a "specially designated global terrorist" group and they are working especially hard to obtain weapons of mass destruction...

DC: Oh yes, they are quite dangerous. You know we have satellite pictures of them barbecuing and serving this unit little babies during their training exercises.

Here we go again.
Posted by Charles Perez at 08:51 No comments:

The Biggest Rat of All Jumps Ship

Now that Bush's Brain has abandoned the ship of state where does that leave the Bush of very little brain?

Will this leave Bush literally running around like a chicken with its head cut off? Although, really, how would we know the difference.

And to Rove, leaving the People's White House; "don't let the door hit you on the ass on the way out."

Whatever Happened to "Give Me Liberty or Give Me Death"?

"Any society that would give up a little liberty to gain a little security will deserve neither and lose both." Ben Franklin

Can you imagine what old Ben would have thought about this?

In a striking but unnoticed extension of domestic surveillance, the little-known National Geospatial-Intelligence Agency deployed a U-2 spy plane on the region affected by Hurricane Katrina in 2005 to track hazards to public health.

He notes that Attorney General Alberto Gonzales' recent testimony to the Senate Judiciary Committee for the first time confirmed the existence of various other domestic surveillance programs beyond those first disclosed by the New York Times, similarly intimating the domestic flyovers are more subversive than simply being used for weather catastrophes.

And the Democratically controlled Congress just handed BushCo. even more authority to use the full panoply of U.S. spyware on you and me.

All hail Ceasar Executivas Unitarius.
Posted by Charles Perez at 10:04 No comments:

Nobody Saw This Coming...

The slow-motion devolution of Iraq has sped up to full-speed disintegration in Basra:

As British forces pull back from Basra in southern Iraq, Shiite militias there have escalated a violent battle against each other for political supremacy and control over oil resources, deepening concerns among some U.S. officials in Baghdad that elements of Iraq's Shiite-dominated national government will turn on one another once U.S. troops begin to draw down.

Basra was supposed to be the very picture of success with a homogeneous Shiite population and little outside influence. But this is what will happen all over Iraq - especially where the population is more heterogeneous - whether there are Western troops there or not. So if our Iraq misadventure is doomed to civil war regardless, why should our soldiers remain in harm's way?
Posted by Charles Perez at 08:02 No comments:

If there's one thing that the Army knows how to do really well it's keeping track of its various weapons. When I was in the Army and we did any kind of training I had to go the "Arms Room" (a huge, vault-like room with racks of weapons right out of the Matrix) and sign out a weapon that had been assigned to me upon arrival in the unit. Every time I signed it out or in the Arms Clerk matched the serial number of the weapon to his master list. When we had weapons out on training the First Sergeant did a physical inventory of every weapon every day. Sometimes twice a day. This was even true of larger weapons like the 20mm cannon mounted to the front end of the Cobra attack helicopters I "owned."

That's why this can only be the result of intentional malfeasance:

A new GAO report shows that about 190,000 guns, given to Iraqi security forces in 2004 and 2005 during training, have gone missing, the Washington Post reports.

The forces were being trained by present-day commander Gen. David H. Petraeus when the weapons were distributed; according to the GAO, proper procedure was not followed, and the weapons have not been properly tracked. The Pentagon isn't disputing the report.

So other than the cost of these weapons which appear to be mostly M-16s and SAWs (Squad Automatic Weapons - a light machine-gun) AK-47s and AKMs,what's the big deal? How about this:

Officials concede that it is likely that these weapons, bought with American taxpayer money, are being used against US forces.

Great way to support the troops, no?

Edited. Changed weapon types based on updated information.
Posted by Charles Perez at 15:22 No comments: