BushCo.'s adventure in Iraq has presented the US with many lessons to be learned; many of which are military, many are diplomatic. Many will be reviewed in military "after action reports." Some others will be reviewed by the striped pants set in State. Others however will not be so obvious; there are no formal mechanisms for learning societal lessons from disasters such as Iraq. We can only hope that they will be learned.

One lesson in particular has to do with the role of religion in society.

So many people in the US think that more religion in the public sphere could only do our society good. As wrong as they may be in reality, they think that their particular set of rules would do us all good. In the abstract, and not tied to any particular sect, they could well be right. The problem, as always, is in the execution. Or, to use a more apt metaphor, the devil is in the details.

Those in the religious right in this country are notoriously unable to see beyond their next church gathering, but I can only hope that the sectarian violence in Iraq becomes an object lesson in the value of the separation of church and state. The disaster, the brewing civil war in Iraq is the future of our country should some sect or another be able to impose its will on the whole of America through the courts or the legislature.

But this is a stunning revelation:

President Bush was unaware of the pending sale of shipping operations at six major U.S. seaports to a state-owned business in the United Arab Emirates until the deal already had been approved by his administration, the White House said Wednesday.

I can't for the life of me imagine what good that admission could do for Bush. He had to have known about this... Just check out all the administration connections to Dubai Ports World; more from the same MSNBC article:

"As you know, the CSX rail corporation, where you previously served as chief executive officer, sold its port operations to DP in 2004," wrote Kerry, D-Mass., in a letter. "Moreover, the presidentÂ’s nominee for administrator of the Maritime Administration, David Sanborn, was DPÂ’s head of operations for Latin America while this transaction was being reviewed ..."

While House spokesman Scott McClellan dismissed any connection between the deal and David Sanborn of Virginia, a former senior DP World executive whom the White House appointed last month to be the new administrator of the Maritime Administration of the Transportation Department. Sanborn worked as DP World's director of operations for Europe and Latin America.

And thankfully even Republican lawmakers are abandoning the administration ship on this. The most straighforward bitchslap at Bush being this:

Rep. Sue Myrick, R-N.C., expressed the anger of many lawmakers when she sent Bush a one-sentence letter that read:

Dear Mr. President:
In regards to selling American ports to the United Arab Emirates, not just NO - but HELL NO!

Speaking of the Former Soviet Union...

Since they've already pilloried at least one Dem for comparing our gulag with that of the Soviets... what the hell.

Had there ever been any "truth in Pravda" or "news in Izvestia" it wouldn't be too much of a stretch to imagine we might have read something like this (substitute KGB for CIA):

The CIA's top counter-terrorism official was fired last week because he opposed detaining Al-Qaeda suspects in secret prisons abroad, sending them to other countries for interrogation and using forms of torture such as "water boarding", intelligence sources have claimed.

Thanks to Eric Alterman for pointing this out in The Times.

Oh, and a big "Thanks" to our domestic media for being such idiots that we have to go to a London paper to read about this.
Posted by Charles Perez at 19:26 No comments:

Well, what else was I to think - at first glance - of this photo/headline combination?

But of course, it was only an article on how Shrubby-boy thinks the US is being held hostage by "foreign oil." It was only the latest re-hash of his sudden revelation, revealed during during the State of the Union Address, that the US uses too much of that "foreign oil." Which is, of course, code (everything this administration says is in code - it's like watching the former Soviet Union) for Middle Eastern oil. Here's the first paragraph:

Saying the nation is on the verge of technological breakthroughs that would "startle" most Americans, President Bush on Monday outlined his energy proposals to help wean the country off foreign oil.

You're damned right we'd be startled if anything remotely scientific or technological came out of this almospathologicallyly anti-science administration. And if it did anything to jeopardize their cozy relationship with the Arab states and big-oil the whole damned country would have a heart attack.

Then you wouldn't need any of that "foreign oil" you've come to so suddenly hate so much.
Posted by Charles Perez at 19:07 No comments:

If Dick Cheney had not had "other priorities" he might have learned in Viet Nam that you don't leave a wounded buddy behind.
Posted by Charles Perez at 18:59 No comments:

What Would Mohammed Do?

Now that Iran has called for cartoons "lampooning the holocaust," will we now see Jews around the world storming the embassies of Islamic countries? If they were to follow that up with cartoons of Jesus getting a little something on the side, would Christians fly into violent fits? Well, besides those in the South... And everyone slams atheists without fear of retribution from us.

I was going to stay away from this... it's just so stupid, but human stupidity never fails to amaze and enrage me. Who was it who said that you'd never go broke betting on the stupidity of your fellow man? 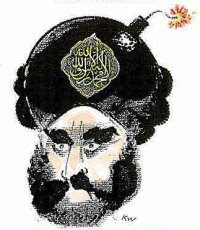 If the fundamentalist mullahs would allow some real education in their fellow citizens, if the governments would spend a little oil money on education and infrastructure and industry, the so-called protesters with nothing else to do but burn embassies and flags might actually have productive jobs. They might actually contribute to the betterment of their countries and the world.

A little perspective, a little common sense; is that too much to ask?
Posted by Charles Perez at 19:41 No comments:

The corporations - especially the oil companies and defense contractors - essentially run the lawmaking apparatus that supposedly represents we the people. The Republican controlled House passes a budget that cuts Medicaid and student loans, the court is packed with conservative Neanderthals intent on setting our rights back to the 13th century, especially for women, minorities and gays, and corporate bosses are essentially moving us back to feudalism. Conservatives have made sure that anything that might smack of "big government" is so underfunded or poorly managed that their results can only disappoint, providing even more ammunition for their argument that the private sector is the answer to everything from healthcare to halitosis.

Where does that leave us, those of us on the left, who hope for something better?

In dire straights. No doubt about it.

Returning Congress to something approaching balance, if not Democratic control seems an impossible task from out here in the hinterlands. The individual races are too hard to keep track of if you're not a professional blogger or somehow in the business. The aggregate of these races could make the difference between a new Medieval Age in America and a continuing Renaissance.

And if you think the choice is not that stark, you haven't been paying attention.

I have to admit I'm in a bit of a funk right now. Where do we go from here? Sometimes I think the answer is "Canada." And, although the conservatives just won themselves a government there, most Canadian conservatives would be considered quite liberal here. In my clearer moments I know that abandoning ship is not the answer, but those moments are fewer and fewer these days.

So there's my rant, there's my dilemma, there's my disgust. I'd welcome any and all advice, any consolation, any words of encouragement right now...
Posted by Charles Perez at 19:50 No comments: